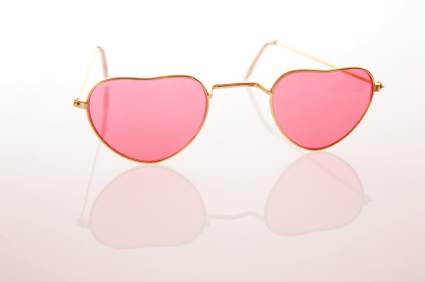 When we’re young, we seek out the opposite sex, definitely wearing our rosiest glasses, while we check each other out.  Both sides are on their best attraction-behaviour, utilizing all the skills available in their arsenals, presenting the most advantageous image possible, because we are looking for “The Right One For Me.”  True love!  They lived happily ever after!  Yeah.  Right.  Don’t get me wrong – I count myself blessed to have had the greatest husband in the world – for me, at least.  It was NOT because he agreed with everything I thought, felt, said, or did.  (Because he didn’t. And I’m glad he didn’t.)

We’re not only careful of how we look, act, and react, we’re also carefully watching Him or Her to see how they handle all situations and events.  We watch every gesture, every action and reaction as to what was said or done, or what we hope was really meant by what was said or done.  Then we can rehash all this information privately, sifting through it, and measuring our compatibility.  We can learn from these encounters, adjusting how we see things, do things, to put ourselves in the best possible light to be totally accepted by our chosen ones. 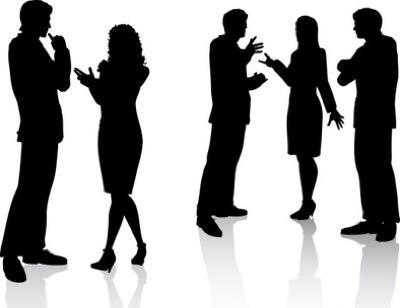 Well, some of us do.  Some of us DO go through all those rituals above, while “looking”, but some of us do not make a choice based on what we have found out about the one under observation.

Some of us are instead hit with a double whammy of a lighting bolt and voilá! We instantly know that He’s the One!  She’s the One!. No testing required! The whole search issue goes away if both feel the same lightning bolt at the same time.  I think True Love At First Sight is real, but rare.  I know that’s what my husband and I experienced when we first became aware of each other.  (Although, to be honest, he did tell me he was kind of following me around and checking me out, and well – stalking me, I guess you would say, for several weeks before we actually met.)

Maybe our meeting wasn’t so fated after all — maybe it was the result of meticulous planning on his part, but hey!  I still felt the lightning bolt, and if he felt his lightning bolt earlier than I did, who’s to say it wasn’t the same lightning bolt with a time-delay? 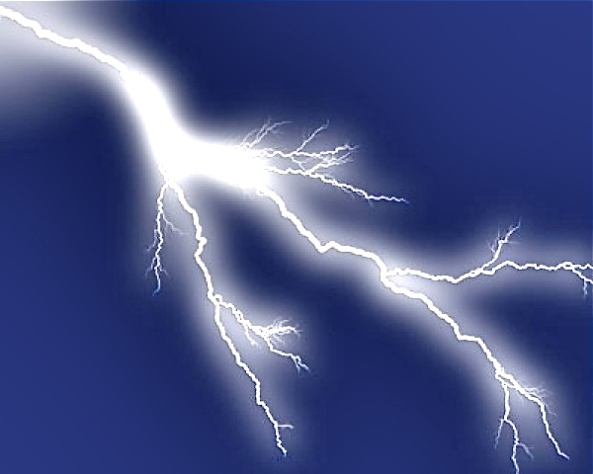 So, having been lucky enough to have met each other and Knowing, and acknowledging that there was no more shopping to be done, except where and when to go for the Happily-Ever-After part of our lives, you would think there would never be any problems between us, right?

Well, almost.  People spend all that time in searching for each other – not to find someone who is the same as they are, but to find someone who is different, but compatible.  They want someone who makes up for their shortcomings;  who finds it easy to fix the plumbing or the car, if they can’t;  who handles the finances well, if they can’t budget, who has good social skills, or a sense of humour, – whatever’s missing in the partner.  Whatever each one lacks, he or she seeks in the other, to complete themselves so they can work as a powerful, united unit. They may not even consciously know this is what they’re doing, but it’s part of the ritual mating game, part of the plan.  The result should provide a huge dose of mutual admiration and attraction for each other, that never wavers, and that is the magical, successful formula for the “happily ever after” part, right?

Right.  So why would we want to change our partner so that he or she thinks, acts, responds to and does things in the same way we ourselves would?  Yet, people do this, all the time, alas.  Each time they do, they brush off a little of the magic foo-foo-dust that makes things work so well in the beginning. 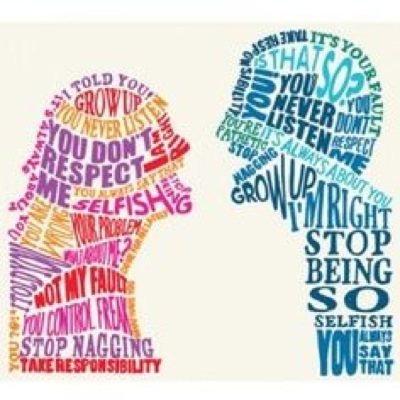 I had wise parents, both strong, totally compatible, a rock-solid, ulta-romantic team, for sixty years.  Mom said to me, “You’re in a corporate partnership now, where sometimes shares can change hands, so that one time he’s the right person in charge, and another time you are, according to the situation and your abilities to manage the day-to-day marketplace of life.”  Or words to that effect.

Dad said to me, “Marriage is like pushing a square block down the side of a mountain.  At first it will bounce all over the place, changing direction, with chips flying everywhere, but as it progresses down the mountain, it begins to round itself out, and starts to run smoothly down a straight path to the bottom.”  It’s the flying chips you have be careful of, naturally.

We were lucky enough and canny enough to realize that when two strong people marry, there really isn’t room for two CEO’s, so we each held onto the roles we were best suited for, and the square block started getting rounder.  We stayed a team throughout our marriage – maybe not as perfect as Mom and Dad did, but pretty solid all the same. 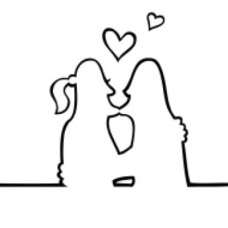 BUT… that having been said — there are still some questions that haven’t been answered for me.  They don’t really make too much difference in our day-to-day lives, but they are a little bit weird to me. And these “differences” seem to be universal, when I speak to my married female friends. 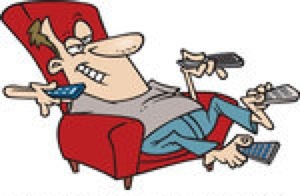 Why does the male of the house absolutely HAVE to control the remote for the T.V., the VCR, the sound system, or any other gadget with a control?  It’s almost as if Crazy Glue comes with the remote and when the package is opened, he immediately applies the glue and says, “Can’t help it.  It’s just glued to my hand.  Guess it has to stay there.”  And to make his point, I think he would actually walk out of the room with it, take it to bed with him, if there was any dispute.

Why, when clothing hampers were made to throw our soiled clothes into, do they end up in front of, behind, beside or on top of, but never inside?

Why do these hale, hearty men, disintegrate into whiny little kids when they get a cold? (“I’m sick, take care of me.”) Accompanied by moaning, ghastly throat and cough sounds….

Why do men never put things back in their proper place?  From clothing to dishes to garden tools? And then ask their wives to find it for them?

But on the other hand, I know my husband had a few questions of his own. 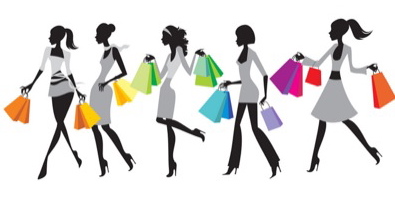 I think the differences between us are the real strengths that keep us together.  In time, as that square block is rolling along, chips flying here and there, sides getting smoother and rounder, I believe the reason for the harmony is that we accept the differences, and ignore them, or genuinely admire them, or fondly – I said fondly – make fun of them – in a very gentle, non-antagonistic way, of course. When our beloved absolutely knows he or she is loved for who they are and what they think and do, and vice-versa, that stone just keeps on rolling.

So, accept the differences, tolerate them, live with them, and Vive! them. 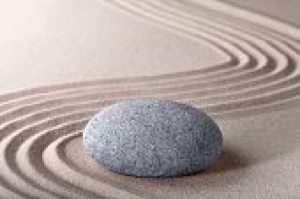 And keep on, keepin’ on 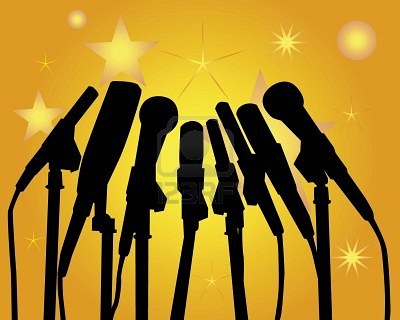 WHAT OTHERS HAVE SAID:

A man has six items in his bathroom. A toothbrush, toothpaste, razor, soap, shampoo and towel. The average number of items in a typical woman’s bathroom is 337. A man can only identify 20 of these.

A woman has the last word in any argument.  Anything a man says after that is the beginning of a new argument.

A woman knows everything about her children. She knows about dentist appointments, romances, best friends, favourite foods, secret fears and hopes and dreams. A man is vaguely aware of some short people living in the house.

Women are never wrong.  Apologizing is the man’s responsibility.

Women do NOT want an honest answer to the question, “How do I look?” 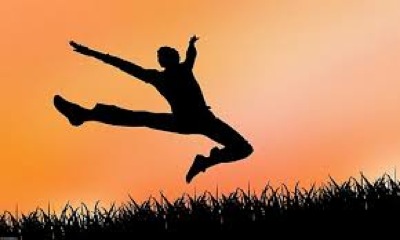 WHY A MAN HAS GOOD REASON TO BE HAPPY

(Ok, I admit I wrote this quite awhile ago, when chips were still flying off that rolling rock…)

WHY THE MEN SHOULD NOT BE SHOT
or
CREATION

When God first made the world, my dear,
He fooled with this and that,
And, just for fun, pulled Adam out
Of His celestial hat.

With animals, God fixed and patched
To make them all just right;
And God left Adam to the last,
Then settled for the night.

When, in the morning, God awoke,
It was a lovely day.
He fashioned Eve’s perfection
From celestial modelling clay.

He was so proud of how she looked –
His masterpiece, at last!
So Gabriel raised his golden horn
In mighty trumpet blast!

God then returned to Adam,
To crush him back to dust –
But Eve, with pity, stayed His hand
From it’s downward thrust.

His eyes full of compassion
For His plaything of the day,
God said, “Oh, what’s the harm in it,
If I let him stay?”

And so He took from Eve, and gave
to Adam what he’s got —
That one and only reason why
The men should not be shot. 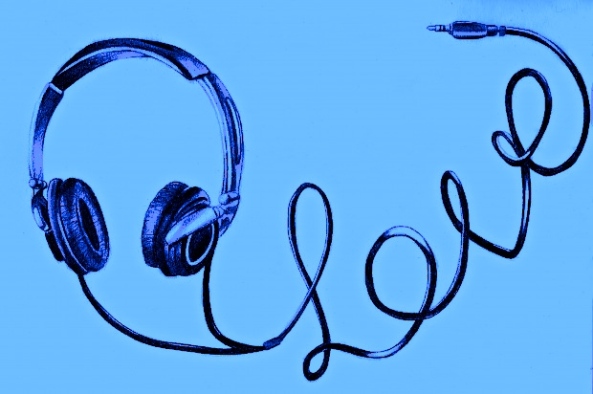 Hello again. It’s EJ’s daughter here with a few of “Vive La Différence!” themed tunes for you. First we have a great Irving Berlin song “Anything You Can Do (I Can Do Better)”, written for the 1946 Broadway musical comedy, “Annie Get Your Gun”.  The story is a fictionalized version of the life of Annie Oakley and her romance with fellow sharpshooter Frank Butler, who both starred in Buffalo Bill’s Wild West Show. This version is from the 1950 movie of the play.

I love SuperHero/SuperVillian movies so I couldn’t pass up this version of the same tune played over scenes from the 2013 movie “Thor: TheDark World”- starring Chris Hemsworth (Thor) & Tom Hiddleston (Loki).

2013 – “Thor & Loki * Anything You Can Do (I Can Do Better)”. Hope you get a chuckle out of this video with brothers Thor and Loki showing their sibling rivalry!  (DailyAsgardianNews/YouTube)

This next song was a 1967 hit for Johnny Cash and June Carter. It’s called “Jackson”, written in 1963 by Billy Wheeler & Jerry Leiber.  The version I picked was a live performance on Johnny Carson’s Tonight Show in 1980. It’s about a couple in the midst of breaking up, but Johnny and June share a kiss at the end just to let you know it’s all just in fun!

For my final pick, I’ve chosen another “blast from the past” with “Let’s Call the Whole Thing Off” from the 1937 movie musical “Shall We Dance”. I love Fred Astair, especially when paired with Ginger, hope you do too. 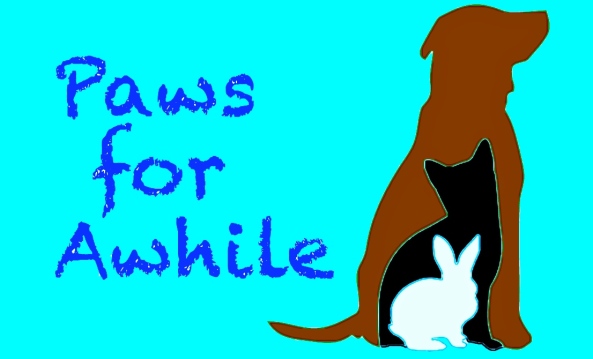 After all is said and done, I think the ideal mate (or at least best friend forever) is — a rabbit!  Differences just don’t seem to matter to them – they not only get along with each other, they get along with everybody! 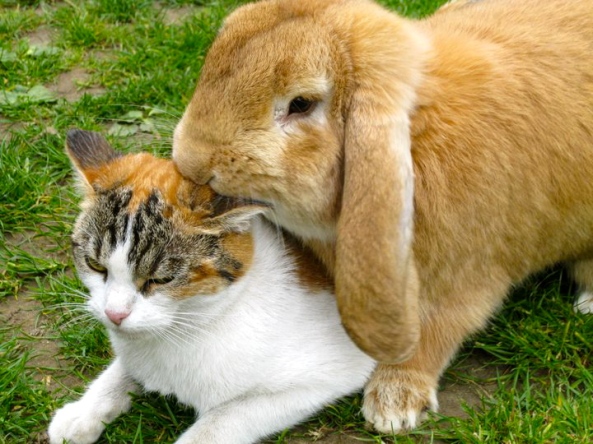 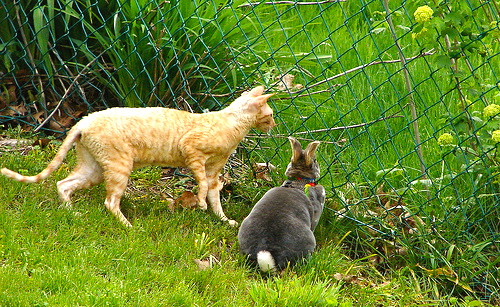 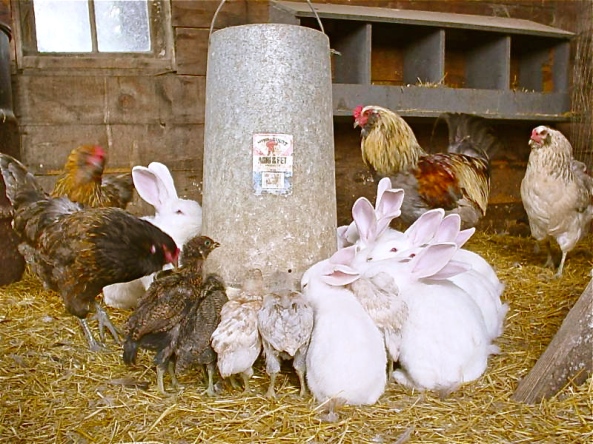 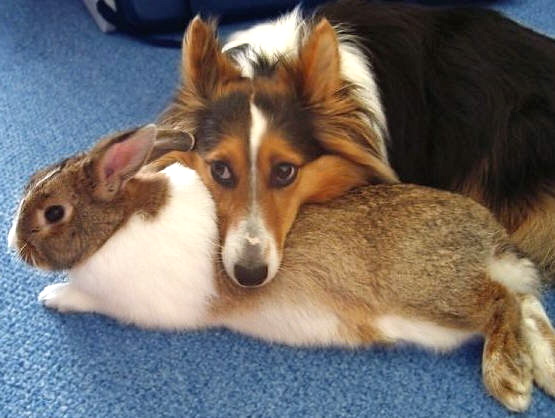 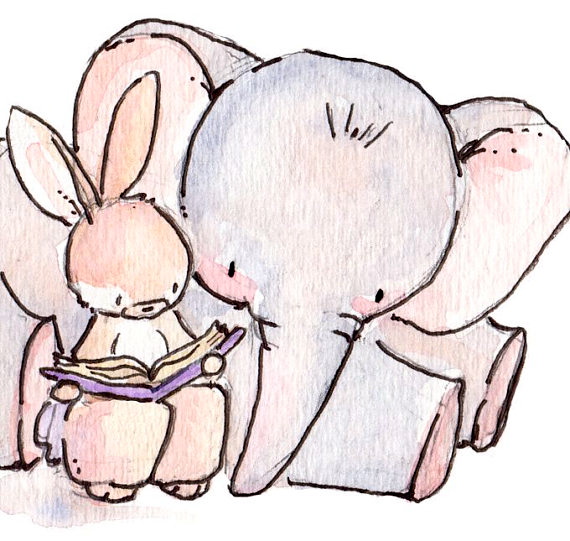 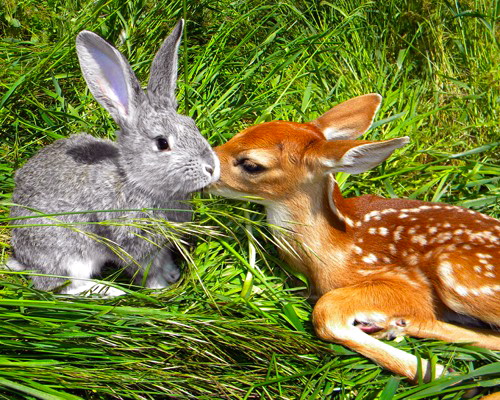 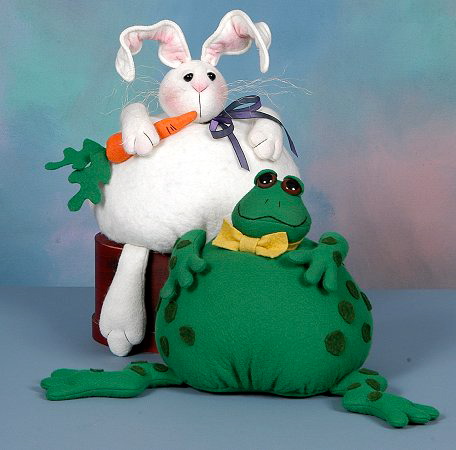 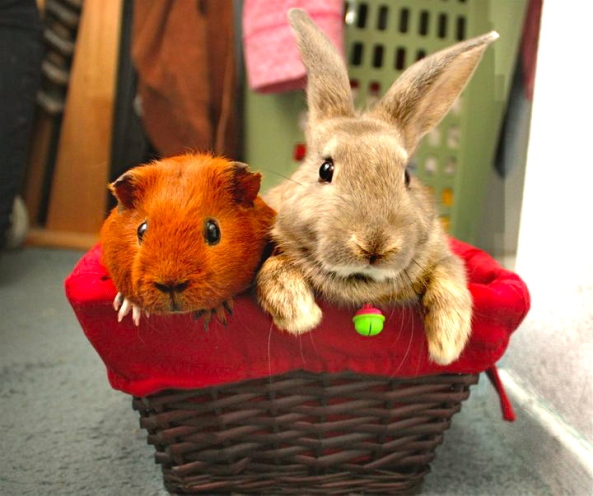 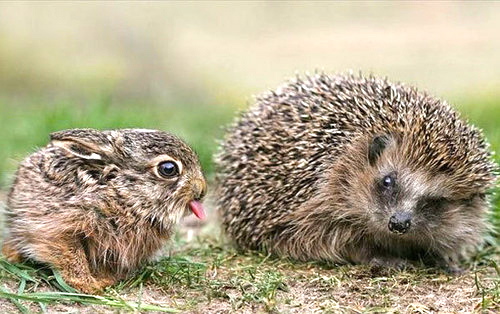 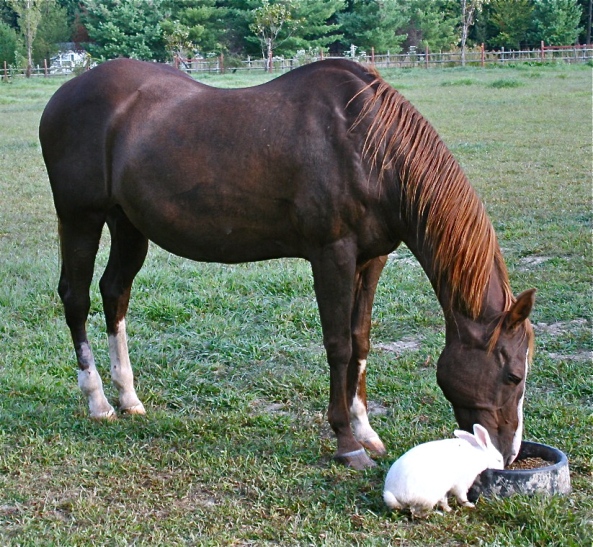 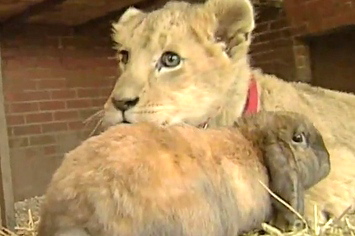 Bunny and Simba the lion 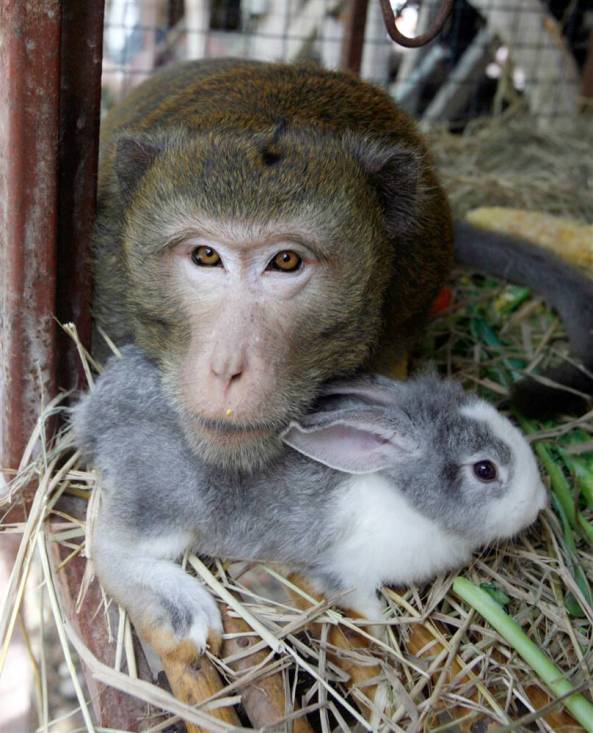 Bunny and the Monkey 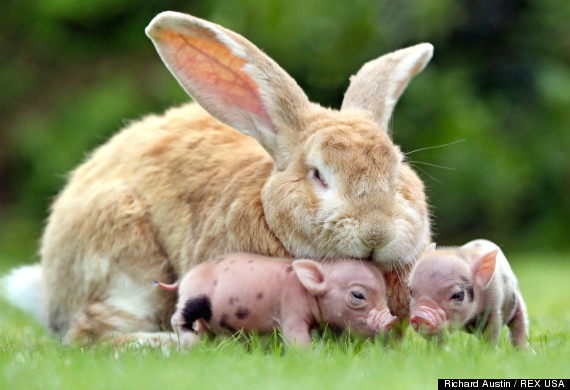 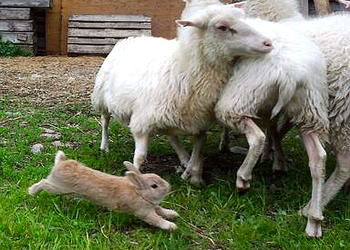 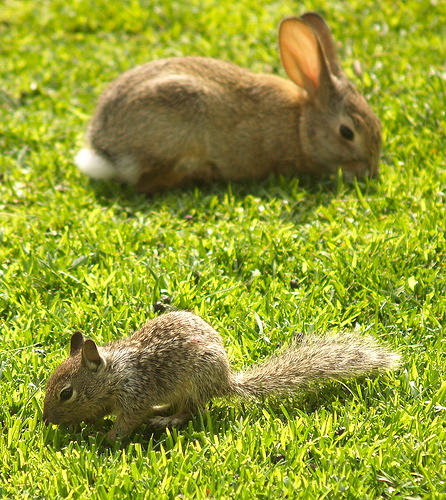 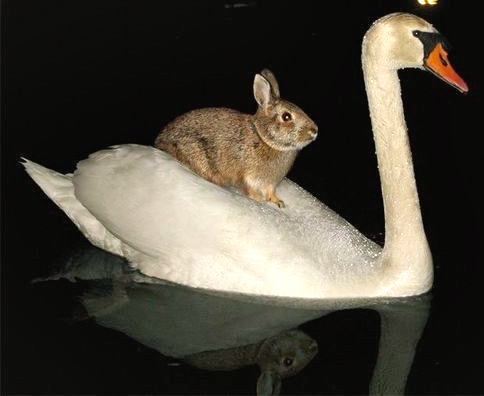 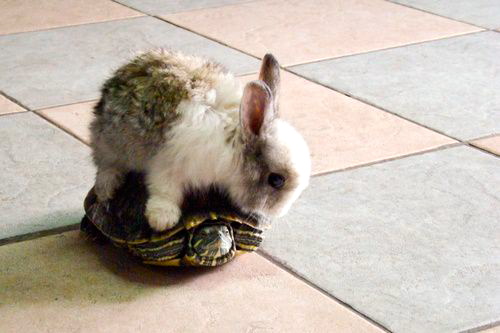 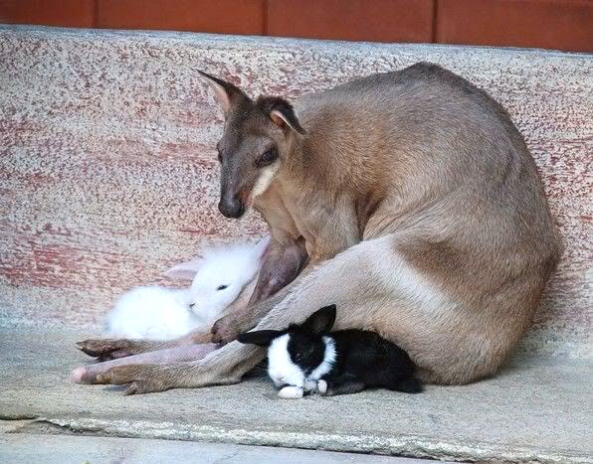 Bunnies and Wallaby (my gratefulness)

And I’ll leave you with that note…..